The Author and His Books:

Jerome Nadal (1507-1580), a Spaniard from Majorca, was one of the first ten members of the Society of Jesus (a.k.a. the Jesuits). For many years he served as the personal representative or "delegate" of the founder, St. Ignatius of Loyola (1491-1556), in visiting Jesuit houses throughout Europe, especially to explain and implement the Constitutions of the Society of Jesus.

Ignatius himself urged Nadal to compile and distribute an illustrated guide for prayerful meditation on the Gospels, in the tradition of the Spiritual Exercises, although the work was not completed until after both men had died. Nadal selected the biblical scenes to be included, commissioned and directed the layout of the illustrations, and composed notes to accompany each scene. With the cooperation and support of Antwerp publishers Christophe Plantin and Martinus Nutius, 153 engravings were eventually produced by Bernardino Passeri, Marten de Vos, and Jerome and Anton Wierix.

In 1593 these illustrations were published in a volume entitled Evangelicae Historiae Imagines ("Illustrations of the Gospel Stories"), arranged in chronological order of the life and ministry of Jesus. In 1594 and 1595 they were again published in larger volumes, entitled Adnotationes et Meditationes in Evangelia ("Notes and Meditations on the Gospels"), with more extensive accompanying text, and rearranged according to the order of readings used in the liturgical year, as prescribed in the Roman Missal. (See the Bibliography below for details about Nadal's books. See also my webpage on the Roman Missal.)

These books became very influential in Counter-Reformation Europe, since the illustrations were among the first to use the new techniques of "perspective drawing," which more realistically depicted three-dimensional shapes in two-dimensional drawings, such as used in the scientific drawings of the day. These techniques made the Gospel stories much more vibrant and realistic, and thus more effective as aides for evangelization and meditation. The influence of these engravings can clearly be seen in the work of later Bible illustrators, such as Gustave Dore.

Description of the Plates: 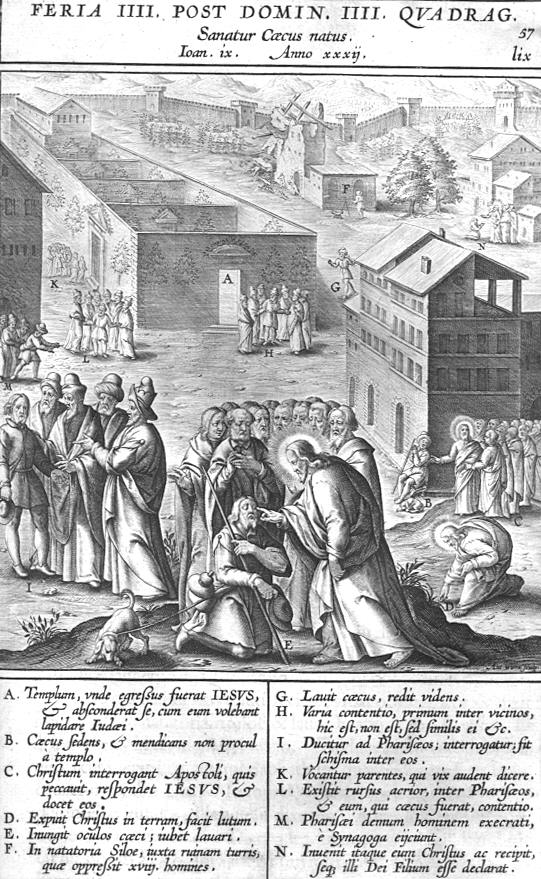 Each of the woodcuts in the 1595 edition includes several pieces of liturgical, biblical, and/or descriptive information:

The 153 Gospel Illustrations of the 1595 edition, arranged in the liturgical order of the Roman Missal:
(for a listing of the same plates in chronological order of the life of Jesus, as in Nadal's original 1593 edition, click here)

Errors and Other Notes:

For a listing of the plates in chronological order of the life of Jesus, as in Nadal's original 1593 edition, click here.

There are a few errors in the pagination, the biblical references, and the page titles of the 1595 edition:

Recall, as explained in the "Description of the Plates" above, that this website lists the plate numbers from both the 1593 and 1595 editions together; thus, plate 101-lxxvii refers to plate 101 of the 1593 ed., which was renumbered as plate lxxvii of the 1595 edition.

All the readings of the liturgical year as prescribed in the 16th century Roman Missal are illustrated separately in Nadal's books, with the following exceptions, to avoid duplications:

These images were graciously provided by Fr. Joseph MacDonnell, S.J. (R.I.P.), formerly Professor of Mathematics at Fairfield University, who compiled a large website with various Jesuit-related materials.
All 153 woodcuts from Nadal's 1595 edition are available on his "Gospel Illustrations" webpage. He scanned them from the copy of Nadal's book in the John J. Burns Library of Boston College, courtesy of its director, Robert O'Neill.

Return to my collection of Biblical and Religious Art